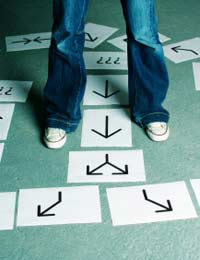 If you're going to be a successful fashion designer, it's essential that you can understand and anticipate fashion trends. Making very similar clothes to those which people have spent the last year buying won't encourage them to spend money on your products. Making things which look different can give you an advantage, but only if potential customers think that they also look cool. Since what's cool changes all the time, and since it can take some time to get a new design ready to sell, you'll need to know what's on its way in the future.

Staying one step ahead of fashion shoppers is so important that, for some people, it's a full time job. These people are known as fashion forecasters and they offer their services to designers and retailers, producing what are known as trend books. A trend book contains a set of colours which are about to become desirable (usually 18 months after the book's publication), plus some samples of fabric which people will want, and some general style advice. Many designers swear by these little books, but they can be expensive, and the result of so many people using them is the sort of homogeneous fashion you'll see in most high street stores. If you decide you'd rather go it alone, there are various strategies you can employ to help you get it right.

Things to Consider when Predicting Trends

Fashion can be a fickle thing, but it is prey to the same kind of social forces which determine so much else that goes on in society. The successful fashion forecaster pays close attention to general world events as well as to the things they see around them. Key factors include the following:-

With all this information to consider, you'll see that predicting fashion trends isn't such a hit and miss affair as it might initially seem. Over time, you're likely to develop an instinct for it. Just keep your eyes open and never ignore an interesting outfit. Be aware of your surroundings. The reason fashion has so much power is that it conveys social status, so the key to understanding it is to understand your social environment.